Our rail-road machine type Mol 40t got approval from SNCF Reseau to operate on all the domestic network from Le Boulou station. It’s the first time in France that such a machine is authorized to fully operate on a railway network such as Le Boulou. 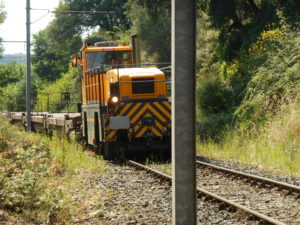 During the proceedings, safety standards were reviewed and tested to make sure that there were equal to the ones of a standard machine. SNCF Reseau requirements were very high which involved a strong collaboration with Lemonnier (our machine vendor).
To get the certification, some infrastructures were modified and compliance tests made.

This machine will support the development of  Le Boulou thanks to a decrease of noise nuisance, a smoother exploitation, a drop in rail operations costs and a reduction of the carbon footprint.

Since August 1st, it is replacing the BB400 type machine which performed on site for more than 10 years.

The machine was inaugurated on July 13th and is called ERAFLOIR. An “Erafloir” in the South West part of France is a tool used in the production of wine to separate the grape berries from the rest of the fruit. ERAFLOIR is the acronym for Engin Rail-Route des Autoroutes Ferroviaires pour une Locotraction Opérationnelle et Innovante sur le Réseau.